Father Tim Pelc tries to stay off social media when possible, but recently, it's become unavoidable. Thanks to the photos from his socially-distanced Holy Week service in Michigan, which involved a water gun full of Holy Water, Pelc has become a meme.

The sudden internet popularity has come as a pleasant surprise to Pelc, 70, who's been with the parish in Detroit for 30 years and prides himself on having a "pretty wacky mind and pretty accepting congregation."

"The original idea was to do something for the kids of the parish," Pelc told BuzzFeed News. "They were about ready to have an Easter unlike any of their past, so I thought, what can we still do that would observe all the protocols of social distancing?"

Pelc came up with the idea of using a water gun to bless his parishioners' Easter baskets from a safe distance, and consulted with his friend, an emergency room doctor in Detroit, to ensure it was safe to do so.

"He said, 'not only is this safe, this is fun,' and he came with his kids," Pelc said. "He provided me with all the personal protection stuff that I needed. The sun was out, we had a nice turnout. It was a way of continuing an ancient custom, and people seemed to enjoy it."

Pelc said he's been amazed at how widely the photos have been shared, and how much they've resonated with people all over the world.

"It was a good news story and people were in the mood for something like that," Pelc said.

They noticed that the photos on Facebook had a wide reach.

"It was big in Ukraine, and the Germans are funny, that led to a whole sub discussion about the types of water pistols," he added. "It even had two hits in the Vatican, which sort of concerned me but I haven’t heard anything yet."

Christine Busque, who manages the church's Facebook page and posted the original photos, said the response has been overwhelmingly positive, and she's thrilled to see others appreciate Father Pelc's trademark thoughtfulness and creative flair.

“People wanted to have a bright side to the things that are happening in the world right now," Busque said. "They saw that, and I think they saw that he cared about his parishioners enough to want to keep his traditions alive but work [within] the CDC guidelines of being safe." 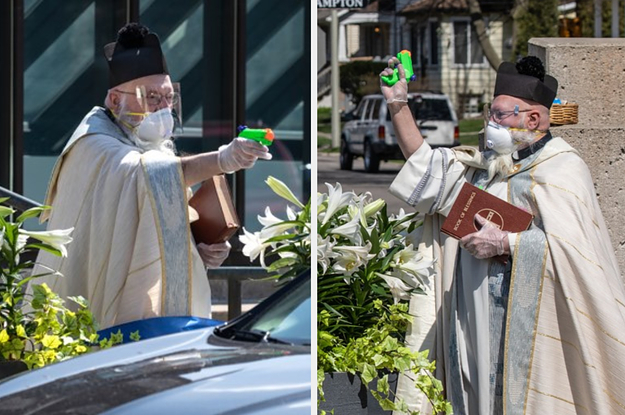 Father Tim Pelc told BuzzFeed News he's amazed at how widely the photo is being shared. "It even had two hits in the Vatican," he said, "which sort of concerned me but I haven’t heard anything yet."